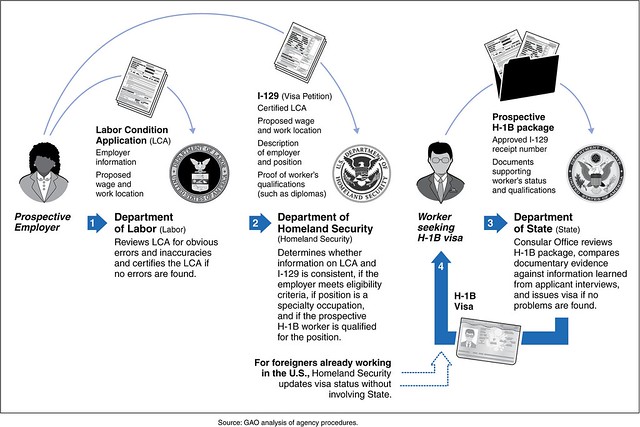 H-1B visa issues do not often reach the federal courts, so it is noteworthy when one does. It is punctuated by the unexpected result – courts give tremendous deference to agencies in interpreting their own rules. A strong body of case law supports that, so when a federal court overturns an agency’s interpretation, it is newsworthy. As the court wrote in its opinion, “While judicial review of agency decisions is highly deferential, it is not without teeth.”

In Raj and Company v. USCIS, an employer petitioned for a potential employee as a Market Research Analyst in 2012. The potential employee had a Bachelor’s Degree from a United States college. The H-1B visa requires a college degree equivalent to the US college degree USCIS requested more information to demonstrate that the position corresponded with a specialty occupation. There are four criteria used in determining whether an occupation is “specialty.” The employer responded with an abundance of documents to argue the point of specialty occupation, but USCIS responded with a denial. The appeal was taken to the Western District Federal Court of Washington. The court determined that the employer and beneficiary of the proposed H-1B were correct; a Bachelors’ degree is required to perform the position of “Market Research Analyst.” The federal court overturned USCIS’ denial.

Another piece of important news for H-1B visa holders and their dependent spouses (H-4) was released this week. USCIS announced that effective May 26, 2015, certain H-4 visa holders will be able to obtain work authorization (regulations). They can concurrently file I-765 (Work Authorization) applications with their I-539 (Change or Extension of Status) applications. Their H-1B principals must have an approved I-140 (Employment-Based Green Card application) or have an H-1B extension subject to AC-21. An AC-21 extension means that someone is in H-1B status beyond the normally allowed six years (two three-year terms). H-1B holders sometimes end up being in H-1B status for upward of 16 years – two three-year terms of H-1B plus ten years of extended H-1B while waiting for the permanent residence date to become current. Long waiting periods are endemic with some EB-2 and EB-3 Green Card applications. The limited work authorization for H-4 visa holders is a smart move by DHS, recognizing that families of H-1B visa holders are economically injured in their years of waiting and sometimes have to abandon their Green Cards as a result. Please note this does not apply for H-4 minor children.

Work authorization is permitted for H-4 visa holders who have an H-1B principal with a pending I-140 (employment-based application) or with an approved I-140 under AC21. AC21 104(c) and 106(a) allow for H-1B visa holders to extend their status with a pending or approved I-140 application for permanent residence. Individuals from countries such as India, China, and the Philippines have excruciatingly long waits for their priority date, even when they are approved for their Green Cards through EB-2 or EB-3 categories. During those waits, H-4 visa holders will be able to work.

This will bring much relief to H-4 visa holders and should help local economies benefit from talented individuals who can now contribute. This proposal was announced with the series of Executive Actions from November 20, 2015 that primarily focused on deferred action for parents of Americans and expanded DACA. However, there are also executive orders that have more support, such as allowing certain H-4 visa holders to obtain work authorization and employment.

November 2014 was not the first mention of permitting H-4 work authorization. Over the summer of 2014, a Notice and Comment period generated enormous support for the proposal, with H-4 and H-1B visa holders voicing their espousal of such a rule. Opposition was minor and consisted of fear that H-4 visa holders would be discriminated against and forced into menial labor positions.

The Law Offices of Andrew Wood applauds USCIS for announcing this rule and looks forward to assisting H-4 visa holders obtain employment authorization. If you would like to learn more about how we can assist you, please drop us a line.